We need volunteers ¡JOIN US!

Yoga as an antidote for the isolation and anxiety of patients with mental disorders. *Translated article from Ara Newspaper for Claudia Frontino – (10/10/2019) 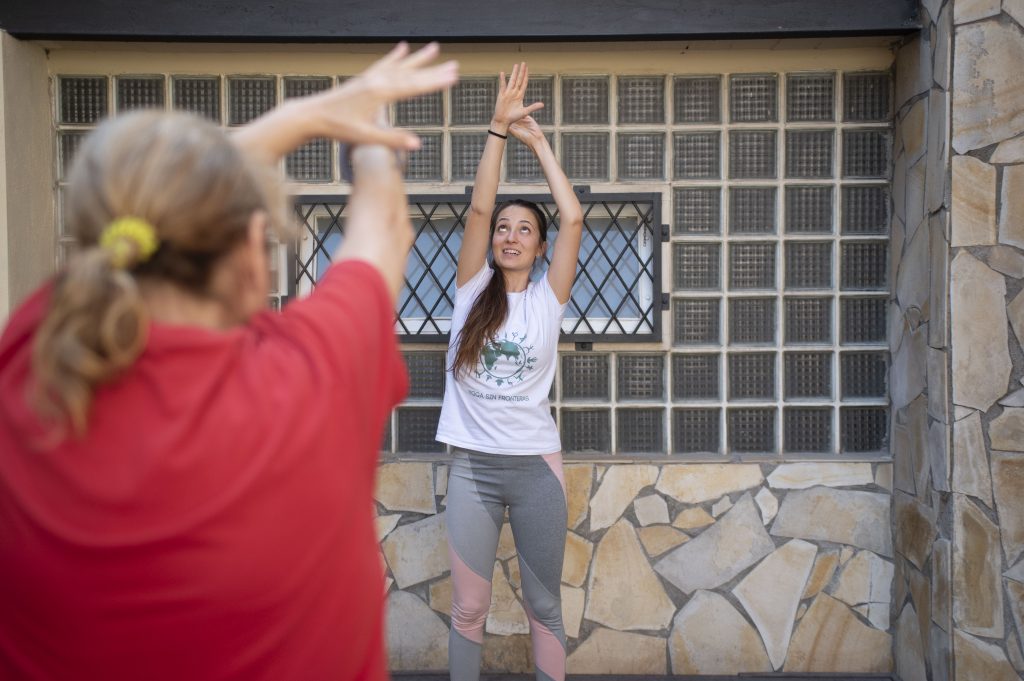 Wednesday it’s yoga time. Sonia or Samuele, in alternate weeks, are the volunteers of the NGO Yoga Sin Fronteras in charge of teaching at the Coroleu Clinic in Barcelona. This NGO works to bring yoga to vulnerable groups “because it should not be an exclusive practice only for those who can afford it,” says Meritxell Martorell, the organization promoter. The socio-health center of the San Andreu neighborhood offers since July the possibility of the center inmates of going out to the backyard to practice yoga for a full hour.

A routine has been created, every week the same. Everyone greets each other and gradually they sit on the mats. The class lasts an hour and, at this time, there are those who follow the instructions, those who are watching the activity sitting on the bench and others who participates off and on.

“The first classes generated expectation and curiosity but after ten minutes they had already tired and lost the interest on it. Now, little by little, they concentrate more and they try to connect through humor,” explains Sonia. The possibility of practicing yoga is not offered to all the patients in the center, says the manager of the Coroleu Clinic, Rosa Pujol. “We make an assessment according to the medical chart of each one and, voluntarily, we offer all activities to patients who need more body awareness.” According to Pujol, offering  yoga fits perfectly with the goal of Coroleu Clinic reducing the anxiety level and  patients medication, as well as improving their communication and coexistence skills.

According to the Health System Observatory of Catalonia, in 2017, 168,688 people were attended in adult mental health centers. In the case of Coroleu, patients are treated between two and four years old. During this time the tasks are made especially thinking about the life they will have outside. Georgina Segovia and Sergio Sada, occupational therapists of the center, value very positively the practice of yoga because it is an activity that they can keep doing later. “We work to give them tools so that, when they leave the center, they have autonomy and enough tools to be integrated,” says Segovia. Along the same lines, the Catalan Mental Health Federation ensures that there are enough indications to ensure that “physical activity increases the levels of well-being and satisfaction while breaking the social isolation of people with disorder, it also helps them to have healthy habits and interact with other people. “

But yoga is not only useful once outside. Their practice is designed for, at their own pace, they can incorporate what they have learned daily during the time they are in the center. In addition, the sense of belonging to a group, patience and self-respect are indirectly worked and, hopefully, in the long run, yoga would help reduce medication doses. “This is very ambitious and you have to work with small goals, but practicing breathing, which as been learned in the yoga class, before going to sleep instead of asking for pills would already be a great success,” says Segovia.